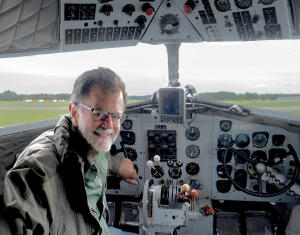 who is very happy in this picture,

but is not a pilot

My grandparents lived at the other end of our street and that, early on, was the longest trip I could take by myself. This was Los Angeles where I was born. My first destinations were close to home; I walked to Crescent Heights Elementary and to Louis Pasteur Junior High Schools. Alexander Hamilton High School, further up the road, briefly brought a yellow school bus into the picture until I joined my fellow Angelinos (yes I know, they really say that) on my own wheels. At 17 I drove north on US 99 to reach UC Berkeley and years later to arrive in Cambridge, Massachusetts for graduate school. I did my duty in academic classes at Berkeley but it was the handful of art and design courses that commanded my attention. Another powerful education in Berkeley between 1963 and 1967 was gotten outside the classroom, on campus and in the streets, and yes that is another story. By the time I got to the Harvard Graduate School of Design my interests had grown to encompass lighting synthesis and rendering. That serpentine road wound through Lama Foundation in New Mexico, the Center for Visual Studies at Imageworks in Cambridge, Massachusetts and at the Maine Photographic Workshops, Rockport, The Center for Creative Imaging, Camden Maine, The School of The Museum of Fine Arts Boston and of course all those surprising unexpected moments and places in between. It did seem I was always traveling.

I was lucky, and privileged to have met Charis Wilson Weston and Imogen Cunningham and to spend a few days each with  George Tice, Garry Winogrand, Henri Cartier-Bresson, and to have a few more days with the engaging, open-hearted Cole Weston. George Tice, a master printer and generous teacher, demystified fine silver printing. Garry Winogrand,  fluidly instinctive with his Leica, lit up the room when he walked in. He also extracted me from a sticky conversation with the Cambridge Police, but that too is another story. Cartier-Bresson was a man rumored to disappear when he released the shutter and strangely I found some truth in that. He remarked “if I have to change lenses I’m not seeing what is in front of me.” Cole Weston showed us exactly how his dad Edward printed, naked light bulb, amidol developer, black finger nails and all. He used one of his dad’s original 8x10 negatives and, ever theatrical, staged a drawing for our tiny group to see who would  keep that print. It was not me, but my friend Todd did take it home and every few years he lends it to me for a couple of years. Come to think of it, it’s getting to be my turn again.

Silver printing, my passion from the beginning, gave way to pigment (initially dye) on traditional water color and etching papers. I realized something in me had been looking for this. I am grateful to the gentlemen,(Jack Duganne, Mac Holbert, Graham Nash) at Nash Editions for introducing me to that technology and for generously welcoming me into their Manhattan Beach, California garage-cum-studio in the early days. As in travel, one never knows which moment may be personally significant or historic. That original IRIS graphics printer, purchased by Graham Nash, is now  in the Smithsonian's National Museum of American History.

At times my dear father was at my side when I made a photograph, always patient as I set my large format camera on tripod and ducked under the dark cloth.
“Is there enough interest there?” he asked when we looked aft from the starboard bridge wing of the Queen Mary. “I think so, let’s see.” I clearly remember that casual exchange. At other times my dear wife was with me, but by then I was using a hand-held Leica. She does have a keen eye, sees differently, and is frequently off in pursuit. It was she who literally dragged me off the street into that Oaxaca classroom. Of course at times I was by myself.

My father was a sweet man with a whimsical sense of humor and a precise hand. He painted and sketched, quietly and privately, much of his life and toward the end asked me to photograph his work. He wanted to give prints to his brothers and families. Invariably these people, who knew him since childhood, said “I never knew you did this!” This is the first time I have shared a comprehensive body of what I have done, images that span my lifetime. My sister-in-law, an accomplished painter, said to me that artists have to be self-indulgent and the people around us support that, so it is a good idea to give back. That struck home.

I would like people to see what I have been doing. Perhaps an image or two might strike home.